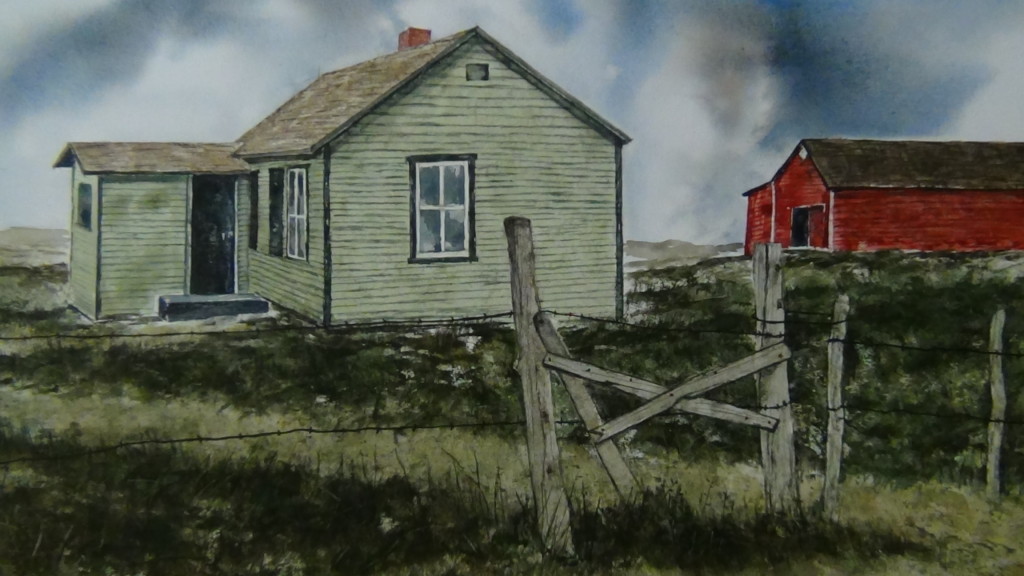 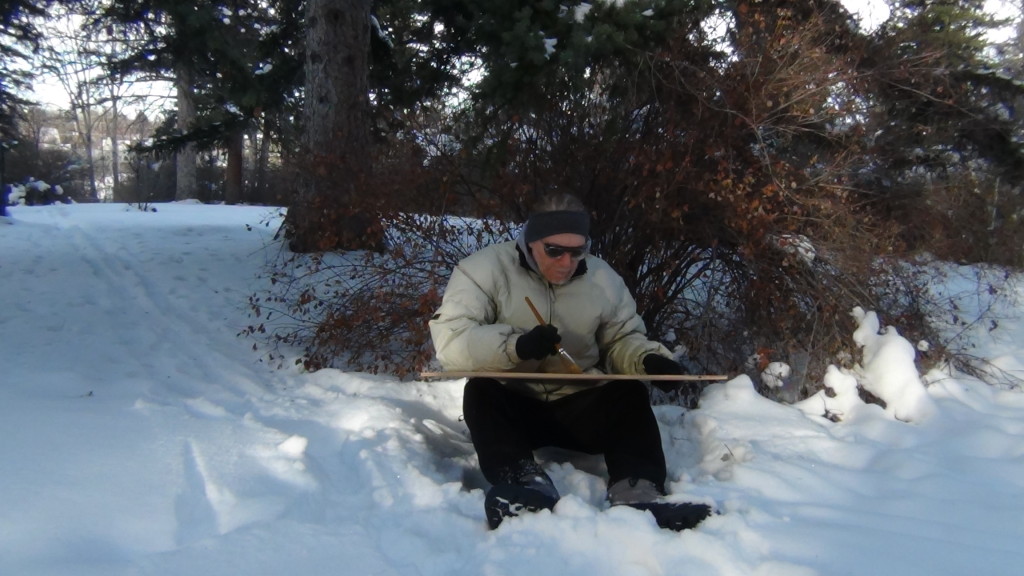 Jerry pretending to be an artist working on location…

A few words concerning the photo above.  While working on this project, the thought occurred to me that it might be nice to insert a staged photo of myself working in the field pretending to create a sketch.  I decided to take along a drawing board and a pencil, and have my wife take a photo of me acting as if I were doing a quick sketch on location.  However, since I seldom sketch in the field with a pencil anymore–much preferring the razor blade and ink–I decided to take those along instead.  All of a sudden, the thought of taking all of that gear along seemed very unappealing.  To make it all easier, I decided to take along just the drawing board and a large single stroke brush instead.  We found a suitable spot, and Joyce very carefully took the photos.  When we arrived back home, I loaded the photos on the computer.  Viewing them, it suddenly occurred to me that we had hoodwinked ourselves.  “Where’s the palette?  Where’s the water bucket?”  An epiphany.  No artist worth his salt would believe this ridiculous photo.  But we sure got a good laugh out of this!  Fooling ourselves…

I was born in 1957 on a farm near Rugby, North Dakota to a very creative mother and father.  As a youngster, I was continually amazed at their varied artistic talents.  My mother was especially gifted in color and design, crafting many wonderful creative artistic items for our home.  My father was always building something, and each project typically demonstrated some very unique artistic touches.  Being immersed in this very creative environment from an early age set the stage for me to begin developing my own artistic abilities.

At the age of six, I began to see that I had some level of creative ability, for the classroom gives one a place to see what others are doing by contrast.  By the third grade this ability was apparent to my teachers, and for the next several years I was asked by my teachers to illustrate the characters for the numerous books we were reading in the various classrooms.  Some of these illustrations were quite large–up to three or four feet tall, and typically executed in either pencil, or colored pencil.  Very fine, accurate renderings.  I experienced significant strides in my work as an artist, and as the years passed my desire to create continued to grow.  My ability to create also moved into the three dimensional realm, as I began to build projects in wood.  By the ninth grade one of my teachers talked me into entering a piece of furniture into a show at the Yellowstone Museum, where I won third place overall among all of the entries from the various schools in Billings Montana.

During my junior year at Bozeman Senior High School, the urge to continue creating was becoming more acute, and it was here that I met two very important mentors–Raymond Campeau, and Dennis Bodily.  That fall in 1974 I watched Ray demonstrate painting in watercolor for the first time.  I was fascinated by the speed of execution, and the thought of learning to paint in watercolor was exciting indeed.  It was during this time that Ray helped me to begin to see the true purpose of art.  Dennis encouraged me to push through to a higher level of perfection in both vision and technique.  He truly helped me to realize that there were absolutely no short cuts to acquiring higher skill levels in the artistic process.  Significant growth occurred at this time under their guidance.  My senior year I began painting on a larger scale, doing oil paintings up to five feet in size.  They were time consuming, and the turpentine really began affecting my health.  As if by magic, at this time I met Valfred Thelin, a very energetic, talented watercolor painter from Ogunquit, Maine.  When I saw that he could execute completed paintings within the span of half an hour–paintings that were very well composed and conveyed a great deal of energy and power, I was hooked.  Topping it all off, the medium was clean and essentially non toxic!

I made the switch to watercolor, a change that made me feel as if I were starting all over again–ten steps back, so to speak.  Despite these new found difficulties, I began to grow as I slowly learned this new medium.  Ray was there to guide my every step, always providing the necessary encouragement at this critical phase.  It was also around this time that Ray introduced me to the ideas and concepts of his mentor–Hilton Leech.  I read his book and was mystified, but when I saw one of his watercolors for the first time, I was nearly knocked off of my feet!  How could someone create a watercolor that demonstrated such incredible brilliance and power?  After all, most of the watercolors I had seen up to that point in time were pale and weak.  Further, the mixing of various mediums with watercolor left me wondering how to proceed.  As I reflected on this foreign approach that utilized new ideas and approaches, it occurred to me that I wasn’t ready for his approach at that time, but you can be certain that I filed all of this away in my heart.

Around the middle of my senior year, I met a very important person who would affect both me and my work in a significant way.  Her name was Joyce Kelley, a very talented individual who could execute very beautiful works in batik, ceramics, and stained glass.  Due to our mutual interest in art, we quickly became soul mates.  We married about 17 months later.  At this time I began selling my work professionally in numerous galleries throughout the state of Montana.  Each of us continued to grow in our creativity, having numerous shows of our work at various galleries over the years.  Creativity was the norm in our home, and we expanded into the area of building all of our furniture for our home.  We also began making an annual Christmas tree ornament, giving these out to family and friends, rather than the usual Christmas card.  Each year we would create an ornament from a different material such as glass, plastic, metal, wood, and paper.  Each year a different media was employed as well.

In the 1980’s we both went back to college, receiving college degrees to further round out our education.  It was a time of personal enrichment.  A son was born during this time, and he too grew up in the world of art, going to numerous art shows, and meeting a cross section of very talented artists working in several different mediums.  By the age of three he was in the habit of carrying a camera with him wherever he went.  It wasn’t long and I began to notice just how well he was able to compose, utilizing very dynamic angles and view points.  His studies in high school increased his desire to create, for he was continually looking at the world through the viewfinder of a camera.  He went on to earn a college degree at the School of Visual Arts in New York City.  Today he works as a professional photographer out on the east coast, and I am continually amazed by his extraordinary vision and talent.

After leaving construction work in 2010, I began to focus on another area of my creativity, and invented two new gunsmithing tools.  In 2014 I was awarded a Utility Patent for each individual tool, and am currently selling these tools through my other website.  Please see Parabola-llc.com for information on these new gunsmithing tools.  Each day I enjoy the flexibility of alternating between the creativity of a fine artist in the studio, and the creativity of an inventor.

Much to my surprise, it wasn’t until the year of 2014 when I came to realize that my greatest mentor was my very own mother.  Quiet, unassuming, steady, consistent–day by day mom left her mark upon me.  At times mom would ride along on trips that were several hundred miles in distance, helping me deliver paintings to various galleries throughout the state.  Mom always had such a keen interest in all things artistic, and collected many beautiful paintings over the years.  Whenever we were together, the conversation would often focus on art.  It was during that particular summer when my wife found four sheets of paper hidden in the baby book of our son, written by mom in her own hand.  The pages contained her own very interesting biography.  On the third page was a paragraph that contained a single sentence, “I dreamed of becoming an artist.”  This was a revelation!

Mom and I talked about that.  She said to me, “That was when I was young–in school.”  Three months before her passing she also told me, “In school I’d say to myself that ‘someday I’ll draw pictures’, but I never got around to it.”  I told mom that she had a gift.  Mom replied, “Yes, but I don’t have it anymore.  Maybe you picked up where I left off.”  Due to time and circumstance, mom grew up during the Great Depression, and married on the threshold of the Second World War.  Very difficult days, and for many there was little time for anything–save survival.  Following this, mom had a very busy life taking care of all the necessary work that had to be done on the farm, and it was during that time frame when she brought twelve children into the world–taking care of their every need.  Without a doubt, a task far more noble than painting the most interesting works of art.

And so the ultimate realization came, that it was primarily through my mother that I began to truly understand why artistic creativity had become such an appropriate, comfortable path… 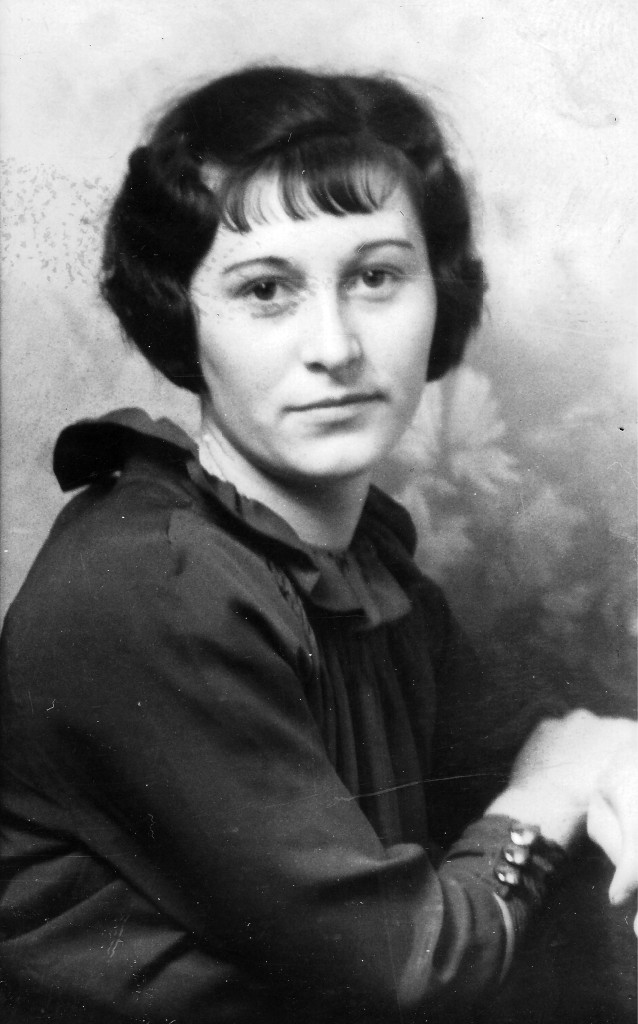 “I dreamed of becoming an artist” 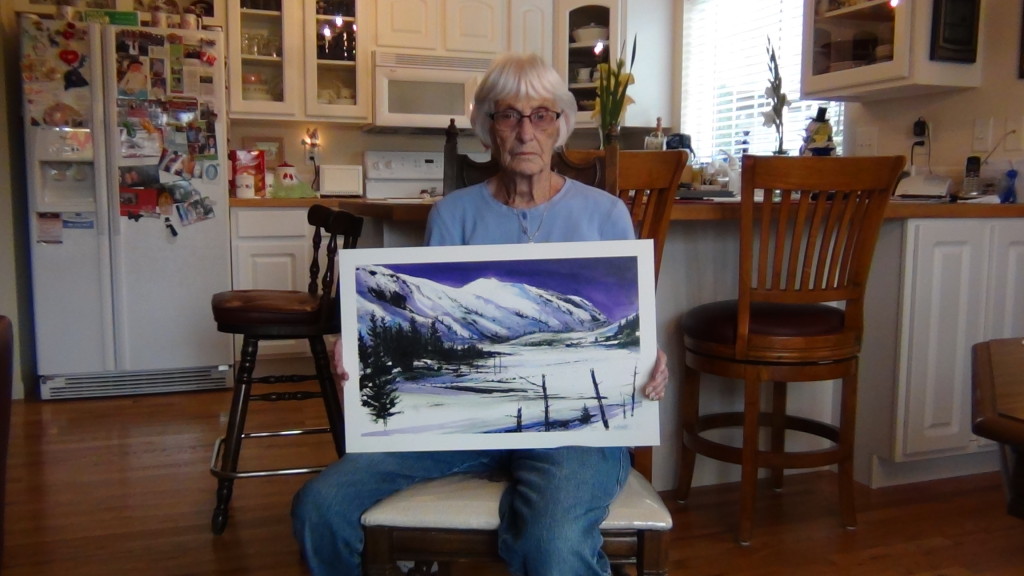 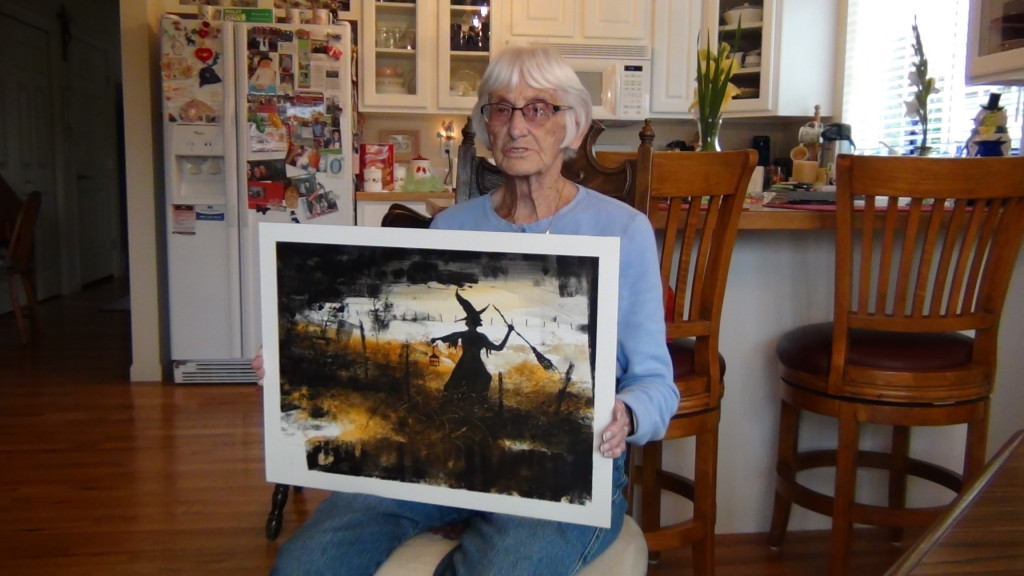 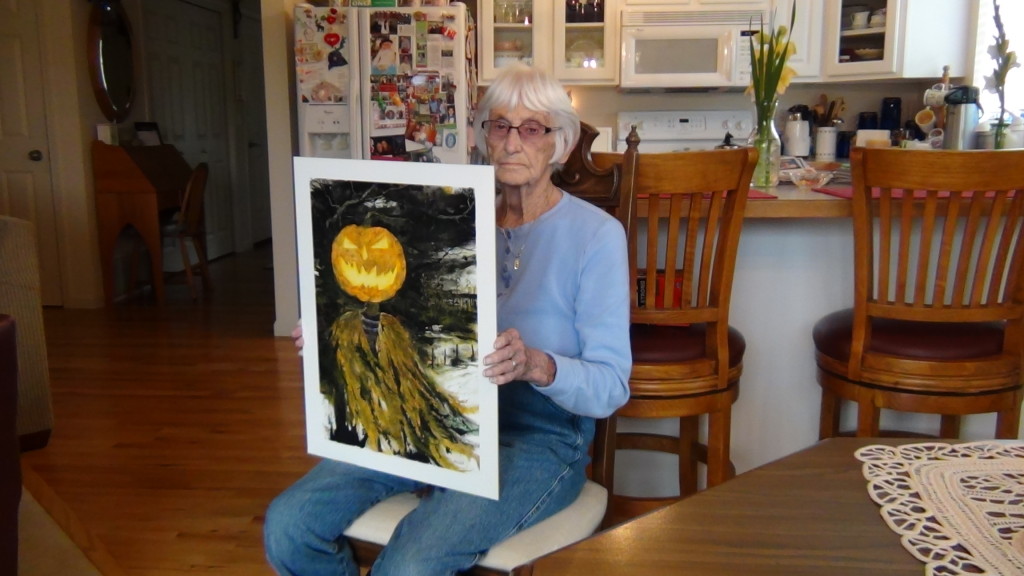 Mom reflecting on the painting ‘PUMPKINHEAD’ in the Autumn of 2014 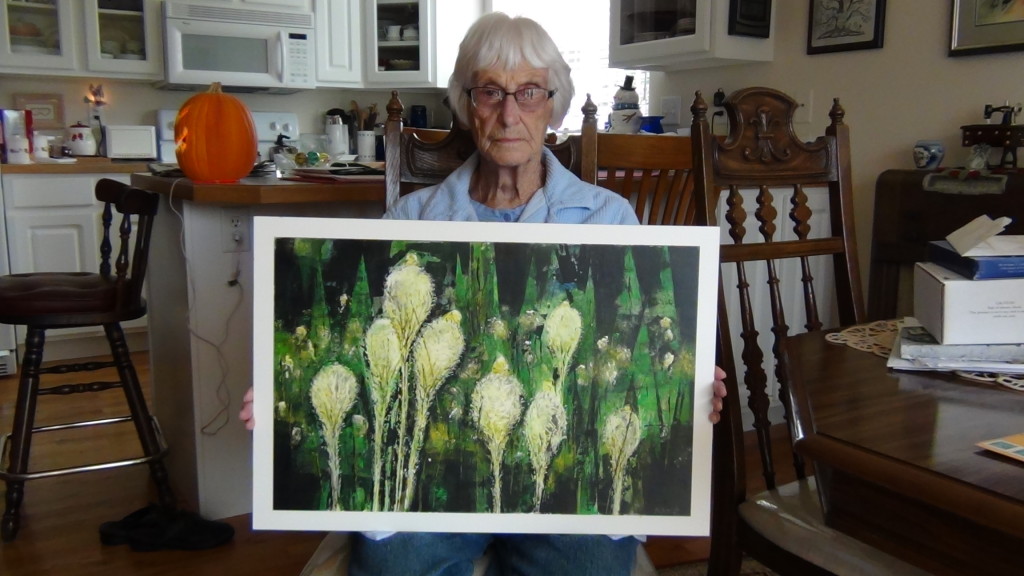 Mom holding the painting ‘BEARGRASS’ in the Autumn of 2014 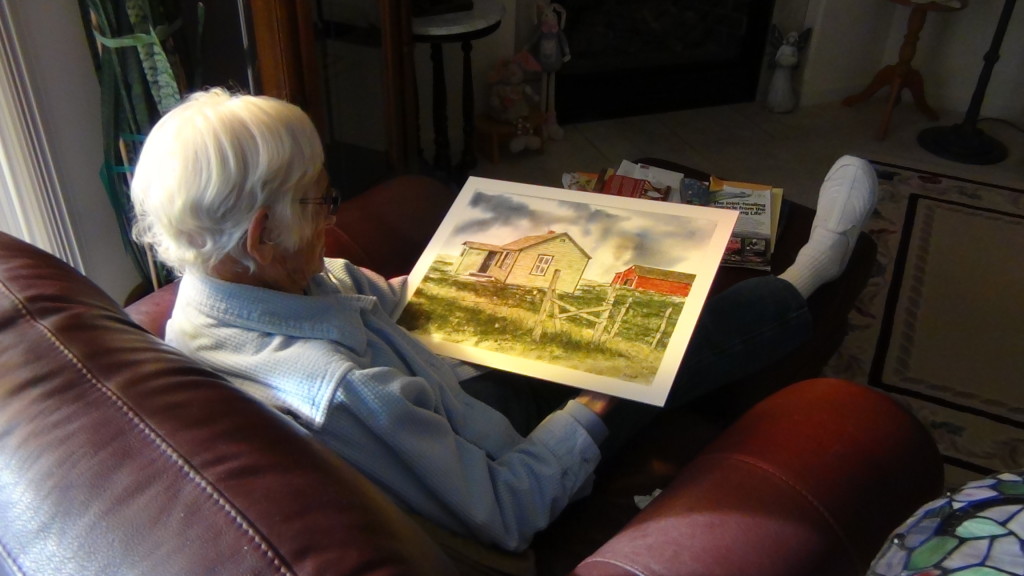 Mom studying the painting that she waited 19 years for–October 16, 2014 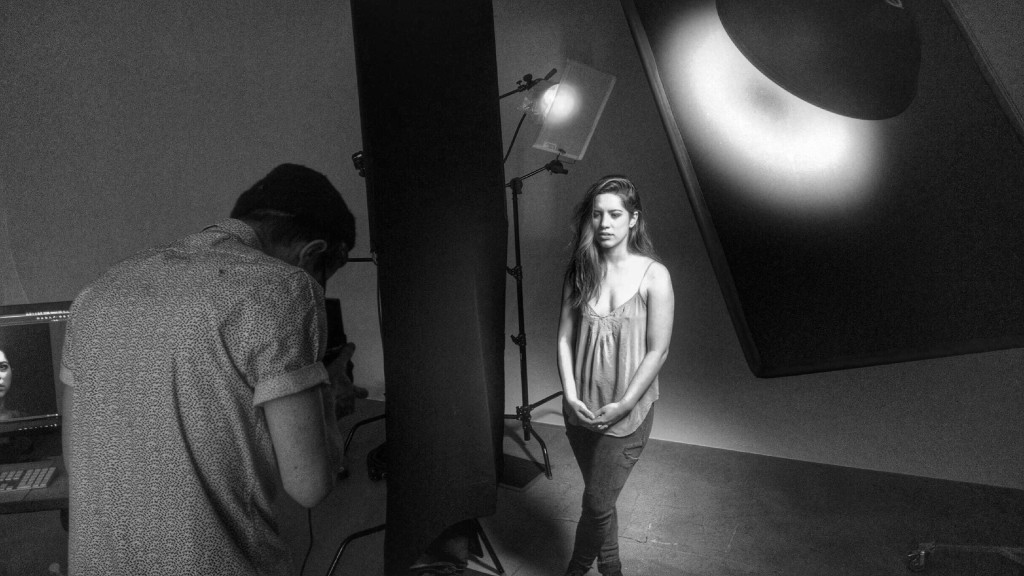 “See something–put it in your head like the pieces of a jig saw puzzle all mixed up.  After putting it all together in your head–you paint it.”

Robyn Schmidt – At about age 8

“Art is what goes on between your ears during the time when you’re not making art.”